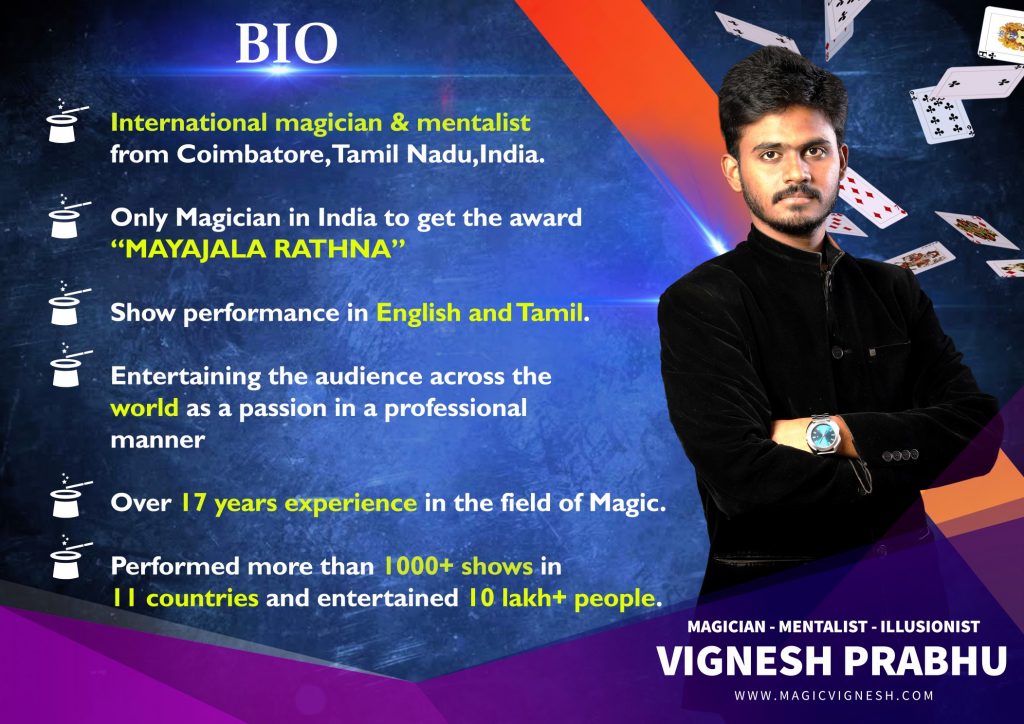 Vignesh Prabhu is an international magician & mentalist from Coimbatore. Working for his passion of entertaining the audience for 15 years in the field of magic & mentalism, more than 10 Lakhs+ audience across the world. He has performed more than 1000+ shows, achieved 7 National awards, one among them is from honourable Dr A.P.J. Abdul Kalam and 3 International awards. Recently in prozone mall, Coimbatore he had his close up magic show done to a crowd and there a person asked him to make his laptop float in the mid-air. But Magician Vignesh Prabhu made an Indian history in the magic by flying(levitate)  in the thin air at an altitude of 160 feet above the ground level making the audience go awe’struck.

The live levitation performance made everybody’s attention turned towards him. the first person in India to this boldly, he gains public with his interactions and he does mentalism to read the audience mind and serve them a great entertainment. level, not only to entertain takes magic to the next in its also a science, his magic makes a child think in a different manner from the usual way of logical thinking. He is a pure Coimbatorian doing the shows around the world, travelling to many countries every year He also performs his live street mentalism with the normal thing from the audience which makes them exclaimed! Although we all think magic is all tricks, This impossible levitation makes us go wrong sometimes, no probability, no possibility of doing this. But he did it! there stand the Modern magic and mentalism from Him